As the original academic building on campus, the Gertrude Kistler Memorial Library has supported the mission of the college since 1926. The Library provides ready access to resources to develop the strengths and abilities users require to respond to the needs and challenges of the times, while facilitating the implementation of technology that enables them to experience the excellence and joy of knowledge.

The mission of Gertrude Kistler Memorial Library is to:

In the summer of 1920, on a summer holiday with her parents, Gertrude Kistler, a student at St. Leonard's Academy in Philadelphia, was drowned in the Yosemite National Park. She was the Kistler's only child, and as the years passed, Mr. and Mrs. Kistler sought some fitting memorial for their little girl. A year after Gertrude's death, Rosemont College had been established. By 1925, some of the girls who had been Gertrude's friends were among its students. It was growing and full of promise, but also full of needs. Mr. and Mrs. Kistler proposed that they build a library in memory of Gertrude, to be called the Gertrude Kistler Memorial Library. 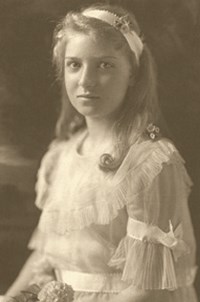 Thus it was that in the summer and autumn of 1925, grey-stone walls rose across the stretch of lawn from the Main Building. Mr. and Mrs. Kistler came often during those months to watch this growing memorial to their little daughter. When the outer structure was completed, Mrs. Kistler came almost daily to share in the selection of its interior appointments. At its formal opening in the spring of 1926, Gertrude's former friends, now students at the college, were gathered for the opening tea; Gertrude's favorite flowers were on the table. The occasion was beautiful but poignant.

In 1935, the library had outgrown its original facilities, and Mr. and Mrs. Kistler most generously agreed to add to the building. Once again, they gave not only money but also loving and generous concern about its every detail. They also contributed annually towards the purchase of books.

During these years, the ground floor of the library served as the college chapel, and was always referred to as the Kistler Chapel. When the beautiful Immaculate Conception Chapel was erected, Mr. and Mrs. Kistler gave the main altar. Thus their name continues to be associated with that deepest and most precious part of college life. 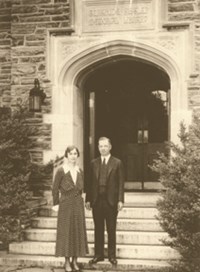 When the Kistlers died, within a few months of each other, in 1952, the college knew it had lost two very generous and cherished friends; but until the President and Trustees were informed that the college was named beneficiary of the greater part of the Kistler estate, they had no idea that once again the Kistlers were to become its signal benefactors. Since the library had again outgrown its facilities, no more appropriate use for this bequest could be found than a further addition to the library building. Once again, ground was broken. The new wing that rose through the spring and summer of 1954 more than doubled the existing building.

The library, as it now exists, thus stands as a memorial, not only to the child Gertrude, but to her parents, Mr. and Mrs. Sedgwick Kistler, to whose memory Rosemont College dedicated the new extension in grateful appreciation.

In 2010, a major renovation came to the first floor of the "new" wing of the Library, dedicated as the Remembering Sister Helen Weisbrod, SHCJ Information Commons. This work resulted in a new main doorway to the library and the opening up of a wide area in the 1954 addition. In the center are a large circular Information Desk, two computer areas, and a large area with comfy chairs and tables. At the far end are two glass-enclosed study rooms. At the other end of the space is Eleanor's Cafe where coffee, tea, and snacks are available for all library users.

Currently, further renovations are ongoing in the Library's lower level, clearing the way for Rosemont to continue honoring the Kistlers' gift by developing new innovative services and spaces for our students.