Majoring in political science, at Rosemont or elsewhere, hones the skills you need for many different careers in private, non-profit and public sector organizations. As a graduate from a political science program, you'll gain the tools you need to succeed in law, business, journalism or communications, finance, campaign management, and in many other occupations. While some of these options require only a bachelor's degree, others require advanced degrees. 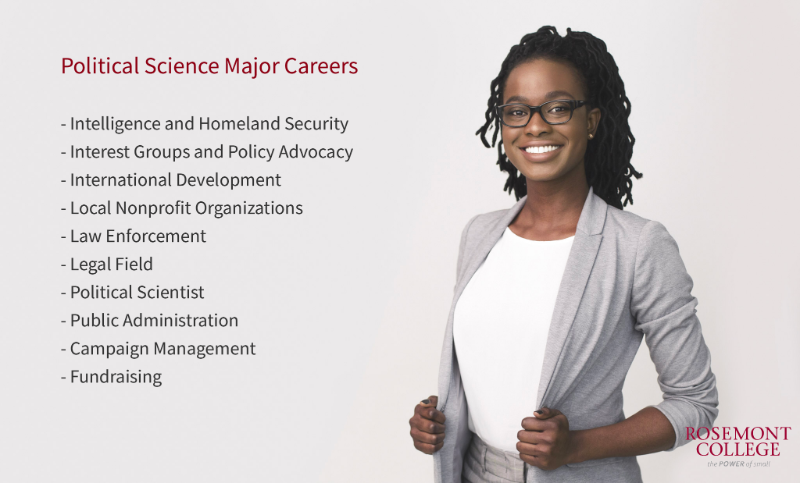 As a political science major, your courses will not only consist of history, the American political system, economics, political thought, and international relations. The discipline is one option among many that fall under the umbrella of a liberal arts education.

This means that you'll undertake a blend of coursework in various academic areas that include various types of social sciences, math, natural sciences, literature,  writing, the humanities, and the arts.

The variety and well-rounded nature of Rosemont’s undergraduate liberal arts curriculum does not prepare you for a single profession, but for the flexible and ever-changing employment options you’ll encounter post-graduation.

While options for political science grads are plentiful, salaries and opportunities correspond with advanced degrees and career experience. Many students enter law school, since the study of political science encompasses the subjects of government, the establishment of laws, and the political system in America and abroad. In fact, political science is the traditional choice for undergraduates who want to attend law school.

Not only for the natural connection between the two subjects, but because the curriculum emphasizes argument, communication, and analysis skills; all of which are vital for achieving a high score on the LSAT test.

For political science students (and other majors) interested in entering the legal profession, Rosemont facilitates a Pre-Law Certificate. The required courses, alongside clubs and extracurricular activities like Pre-Law club, are designed to prepare graduates for success in law school (and subsequent achievement as an attorney.)

Other students continue on to business school, where their communication and analytical skills come in handy. Similar to law school, business school admissions do not seek out any particular major in applicants. For clear reasons, a graduate or doctorate degree in political science or public policy is also a natural choice. However, these are not the only options for political science degree holders!

For example, Rosemont College offers a 4+1 dual degree program that combines a BA in Political Science with an MA in Homeland Security and Emergency Management. Students in this program may begin graduate courses as soon as junior year, shortening the total time spent in school. Why combine Homeland Security with Political Science? The topics in both programs include the legal system, public policy, history, and political theory.

Lawyers advise and represent individuals, businesses, and government agencies on legal issues and disputes. Lawyers are employed by individuals, corporations, unions, and groups, at all levels of government, and may also work internationally.

Judges and hearing officers apply the law by overseeing the legal process in courts. They are employed by federal, local, and state governments. They usually have law degrees and experience as lawyers.

Fundraisers organize events and campaigns to raise money and other donations for organizations. They may design promotional materials and increase awareness of an organization’s work, goals, and financial needs. Many political scientists involved in fundraising work as campaign managers, lobbyists, and fundraisers for public institutions or candidates seeking election.

Salaries for Other Positions Held by Political Science Graduates