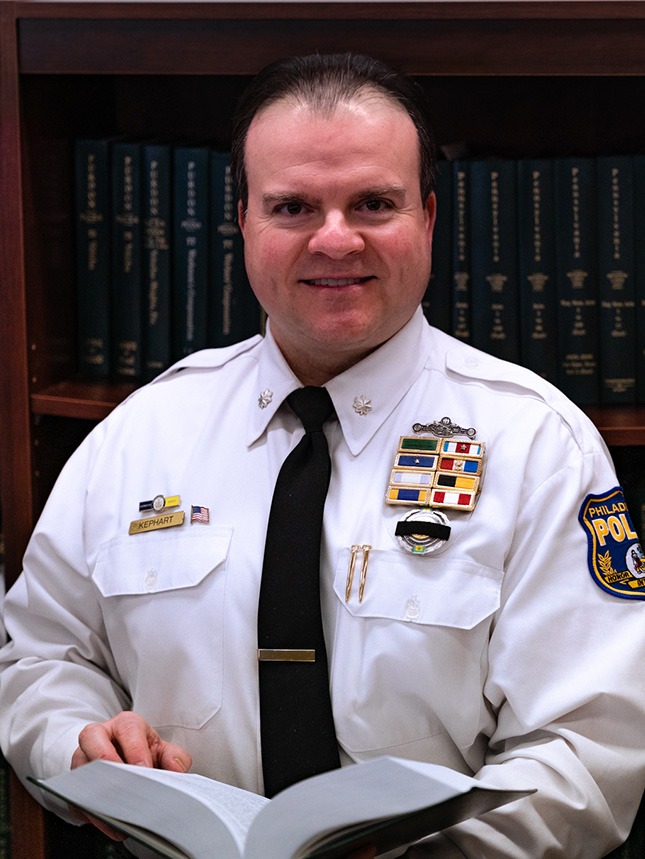 Derek Kephart is a recent graduate of the MA in Homeland Security and Emergency Management program. Here's a snapshot of Kephart's accomplished career, now enhanced by his Rosemont education.

I am a Philadelphia Police Department Commander with the rank of Inspector. I have 24 years of policing experience in the nation’s 5th largest police department. In my current position as the Commanding Officer of Research and Planning, I am responsible for researching, developing, and managing the PPD’s emergency plans, policies, and procedures. Additionally, I am responsible for ensuring the PPD’s compliance with open records laws and other regulations related to the Freedom of Information Act.

In my previous rank, I was a Police Captain and the Commanding Officer of the Real Time Crime Center. The RTCC is located at the Delaware Valley Intelligence Center (DVIC) Fusion Center. As a major part of the DVIC, the RTCC leveraged the latest technology to identify, track, and deploy resources to attack crime hotspot locations.  While at the RTCC, I also managed the PPD’s camera surveillance system and other technologies utilized at the Delaware Valley Intelligence Center (DVIC).

In my rank as Lieutenant, I was assigned to the Advanced Training Unit. As a certified instructor, I was responsible for conducting Municipal Police Officer training. Prior to the A.T.U., I was assigned as a Lieutenant in the 12th Police District. As a Sergeant, I had assignment posts in the 14th District, 1st District, and in the elite tactical unit known as the S.I.T.E Unit. The S.I.T.E Unit was known as the Strategic Intervention and Tactical Enforcement Unit. We operated in the highest crime areas of the City of Philadelphia and followed the ethos of intelligence-led policing.

I was also a Detective, where I was assigned to the Special Victims Unit. As a Detective, I obtained great investigative experience conducting interviews, obtaining arrest and search warrants, and collecting evidence. The S.VU. was tasked with investigating sexual and physical assaults against women, children, and the elderly. As a Police Officer, I was assigned to the 6th District in Center City.