Many Rosemont alumni have found their work changing dramatically during the COVID-19 pandemic. For some, it ranges from in-person to virtual meetings or a shorter commute to the living room, and for others, it has had a larger impact.

Victoria Nastri ’92, who already worked from her New York City apartment, found the changes in her job a rewarding opportunity.

Victoria is Director of Corporate Alliances for the USO. She works with corporations to partner on the USO’s critical mission to keep active duty service members connected to the things they love – family, home and country.

By collaborating with companies, Victoria identifies ways they can support the Armed Forces via cause marketing efforts, employee engagement opportunities, corporate giving programs and other donation opportunities. When the pandemic started taking shape and members of the US military were both impacted by the virus and being called to respond to the humanitarian crisis, Victoria’s work as a fundraiser spun on a dime. 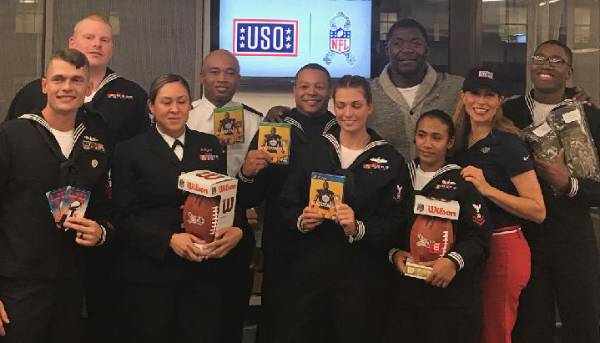 As a global organization, USO centers and teams responded quickly as the pandemic spread around the world as their centers in Italy and Korea along with U.S. troops serving there, dealt with the virus in these early hotspots.

Then the news came of the outbreak of COVID-19 among the sailors on the USS Theodore Roosevelt, where over 800 became infected, leading to the entire crew of nearly 5000 to be quarantined in Guam. The USO pivoted its operations, programs and services to quickly adapt to the new needs.

From a member of the Roosevelt crew; “Thank you USO Team for all your hard work to strategize /order/account for care packages for Roosevelt sailors. We wish you could hear firsthand the thanks of sailors and Navy leadership.

Your caring is making a huge impact in the lives of these service members and their families. USO care packages are the only outside items allowed to Theodore Roosevelt personnel at this time. If you were not caring about Guam right now, they would have nothing at all.”

In addition to global support, the USO is supporting the crews aboard the military medical ships USNS Comfort and USNS Mercy and members of the National Guard who have been called up across the county, such as in New York City where the Guard is helping to staff a medical center at the Jacob K. Javits Convention Center. The USO, whose mission also includes supporting the families of the military, launched initiatives for the military families, quarantined on bases.

How does Victoria’s role come in? She has been reaching out to the many corporate partners of the USO, asking them to extend their already generous support to help with the USO response to the pandemic. Sharing the unique challenges and needs of service members and their families brought on during this crisis has inspired so many partners to heed the call and provide the critical funds needed to continue their mission.

One of Victoria’s corporate partners, a large media organization donated use of its digital media streaming platform to help the USO deliver its iconic entertainment engagements virtually. Most recently, CBS “SEAL Team” actor David Boreanaz chatteddirectly with 10 service members from various Army and Air Force units at Al Asad Air Base in Iraq.

Culinary icon Martha Stewart also hosted a cookie decorating session from her own kitchen for military families on Facebook Live in support of Month of the Military Child. The streaming platform is also being used to share USO programming for military spouses and families that have transitioned to virtual engagements during COVID-19. A spokesperson for the company said, "During this global pandemic, a few hours of entertainment can make a difference to our brave service members who are putting themselves in harm's way."

Victoria’s efforts have also garnered additional donations toward the USO's Combat COVID-19 efforts which will support USO programs and services like USO care packages. These donations support programs such as virtual coffee connections for military spouses and streamed story telling for military children. Important virtual services have been put into place worldwide, as servicemen and women cannot visit in person the USO centers on base due to the virus.

Victoria says she was drawn to work at the USO because she is the daughter of a Marine. “My father served for 22 years. To give back to the military community is very important to me. The men and women that serve our country and their families should never be forgotten for the sacrifices they make every day.

With the help of our USO corporate partners, we are providing programming and virtual engagements to boost morale and maintain connections during the pandemic. We are grateful for all that the military community is doing to help protect us and reduce the spread of COVID-19,” she said.

“Actions not words” is the motto Cornelia Connelly gave to her Society of Sisters and to her schools. This is one of Victoria’s favorite statements especially when she thinks of the USO. “We often talk about our mission in action at the USO; it is this sense of purpose that impacts my passion for our work.” She says it reminds her of the way Rosemont’s mission has made Rosemont a special place.

“Rosemont had a big impact on me, and I am still close to many of my classmates. Infact, throughout my secondary education and professional career path, so many opportunities came through a Rosemont connection. It’s true about the POWER of Small.”