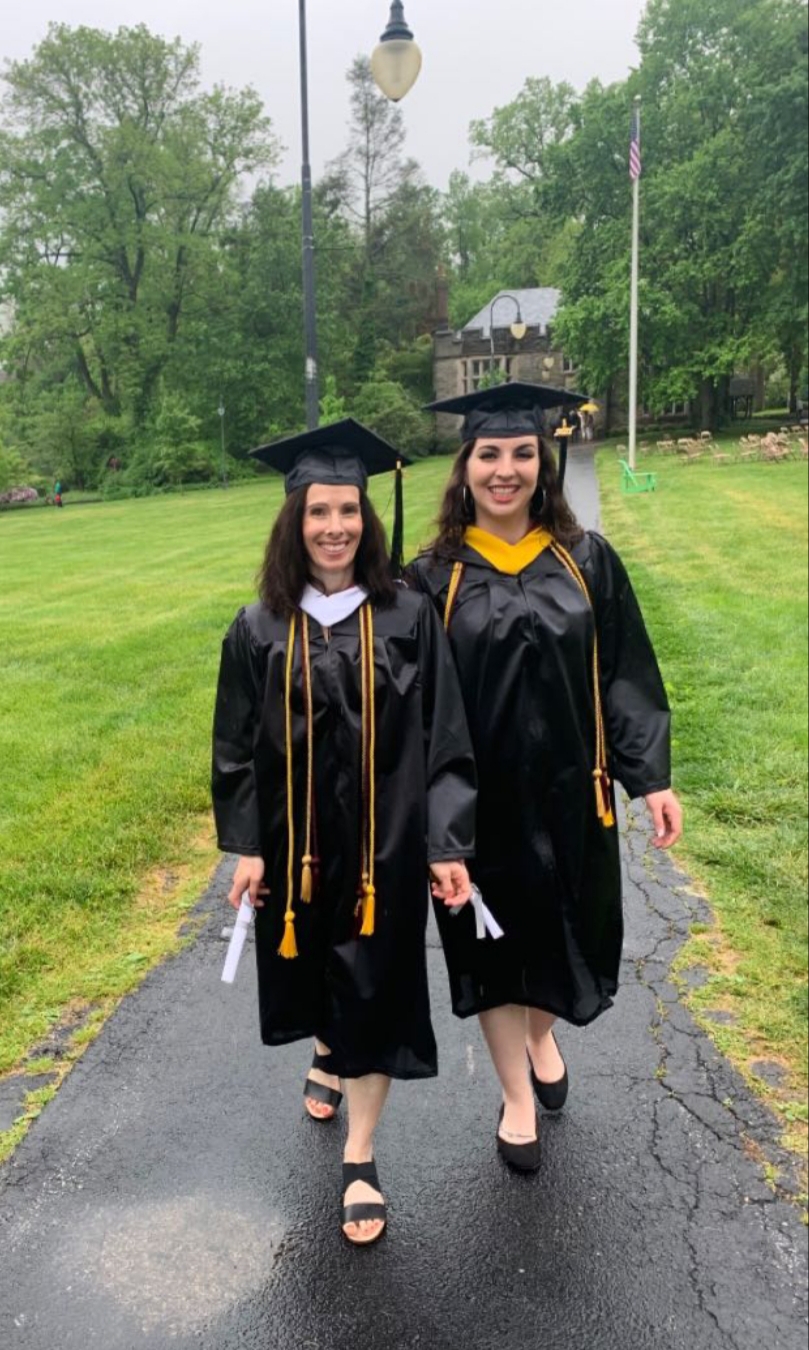 “I was enrolled in a large university and decided that I would be more successful at a smaller school,” said Adrianna Cunning, of Woolwich Township in New Jersey. “My whole family helped to research options in the area, and my aunt suggested Rosemont. We went for a tour, and I decided it was perfect for me!”

Adrianna enrolled in January 2020 as a transfer student and declared a major in Criminal Justice. Then the pandemic shifted all her courses online, and she moved back home.

“I only spent a few weeks on campus before COVID-19 hit, but during that time I loved the environment and especially the older buildings,” said Adrianna. “The library was my favorite. Once I began online courses, I loved that the format allowed us to feel like we were still interacting and getting to know our professor and classmates.”

Soon, Adrianna’s mother, Abigail Cunning -- who had long wanted to complete her undergraduate degree -- saw potential in enrolling at Rosemont as well.

“I had an associate degree in Paramedic Science and credits from multiple colleges but wanted to pull it all together and finish a bachelor’s degree,” said Abigail, an EMT Instructor. “As a stay-at-home mom to Adrianna and her 15-year-old brother, I had been taking college courses on-and-off since 1995 but never really settled on a major. I soon realized the Adult Professional Studies program at Rosemont would be the ideal way to finish my degree.”

“I knew the online format would be perfect for me,” she said. “I work part-time but wanted to finish my degree quickly after working on it for so long. When my husband and I visited Rosemont with Adrianna, I just fell in love with the quaint, warm, historical atmosphere. The people we worked with both in-person, on the phone, and through email were very friendly and quick to answer questions. The entire Rosemont experience was welcoming, unlike some large colleges and universities where students can get lost in the shuffle.”

It wasn’t long before Adrianna found herself sharing an office alongside her mother, who began her studies in applied psychology in May 2020.

“I set up a home office we both used to study and complete our assignments,” said Abigail. “While Adrianna is a night-owl and tended to do a lot of her studying late at night, we did work side-by-side on occasion.”

“It was really awesome to study with my mom,” said Adrianna. “I lived at home for most of my time at Rosemont, so we shared our main study space and spent a lot of time on our computers together. We got pretty good at proofreading each other’s work because we knew what the professors were expecting.” 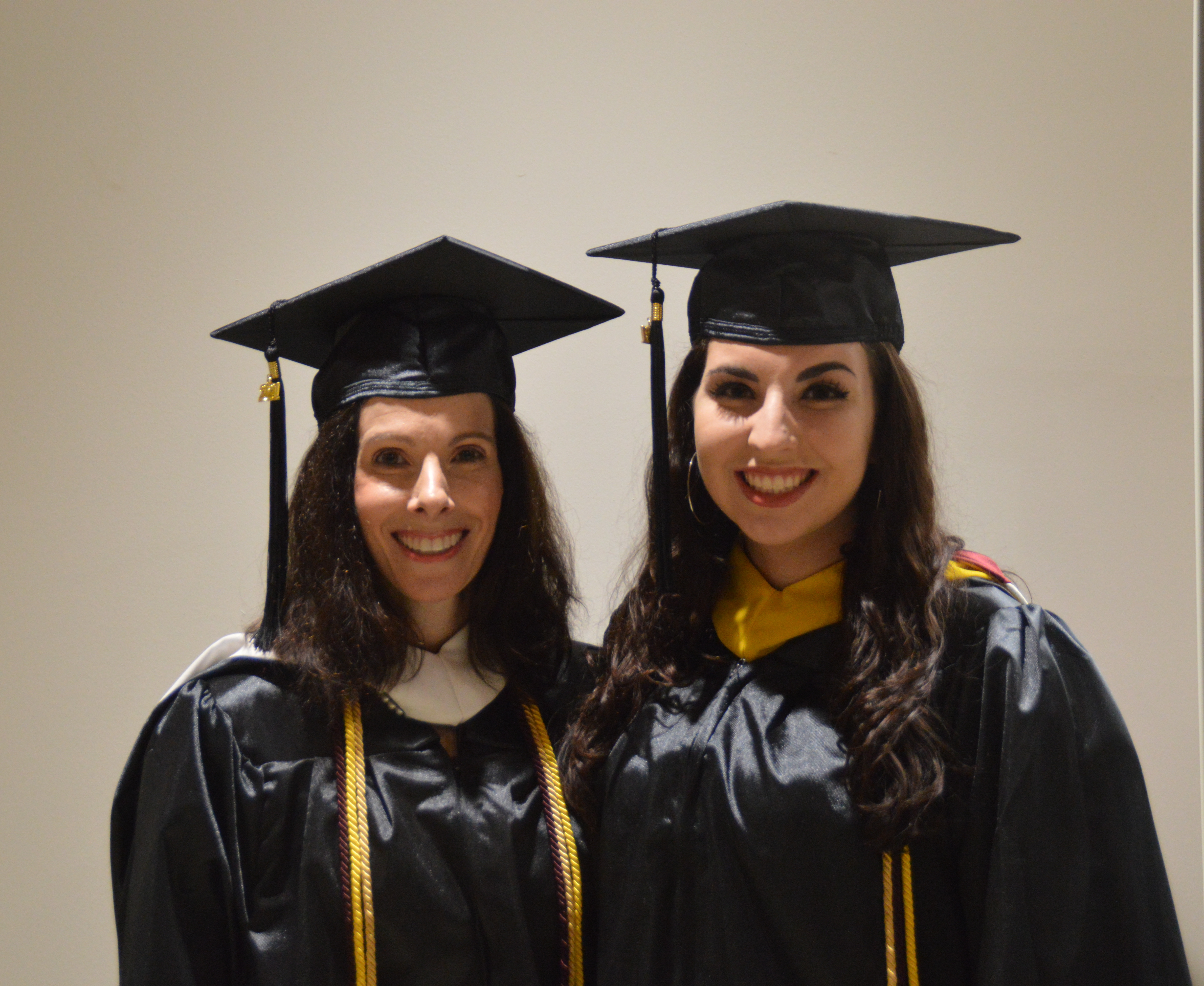 Her mother echoes these sentiments.

“It was fun to ask her opinion on a professor I was about to take a class with,” said Abigail. “I asked her to proofread my work and critique my APA formatting on a few occasions. We even took a religion class together.”

“I am very proud of Adrianna's accomplishments and was honored to stand beside her as a classmate and mom!” said Abigail.

“It was amazing to finish our degrees during the same term,” said Adrianna. “I knew that participating in graduation with my mom was going to be special, but the experience was even more memorable than I had imagined. The crowd’s reaction when we were announced as a ‘mother-daughter duo’ was absolutely heartwarming.”

With graduation behind her, Adrianna – who has relocated to West Chester, PA with her boyfriend – is considering law school and pursuing a restaurant management position. Abigail is now pursuing graduate studies in homeland security with a concentration in public health preparedness.

“I really enjoyed the small classes and personalized attention from the professors at Rosemont,” notes Abigail. “I took several interesting courses and improved my writing skills. Those lessons have served me well so far in graduate school as I hope to further my teaching career in emergency management and public health.”

“I’m so proud of my mom,” Adrianna added. “I’ve heard that it is difficult to regain the motivation to finish your degree years later. She’s an extremely hard worker and oftentimes did significantly more than was expected in her assignments. I’m so lucky to have been raised by such a strong woman who continues to inspire me every day!”