Whether through her practice or her newly published children’s book, Lauren Sugalski Mosback ’10 is a positive 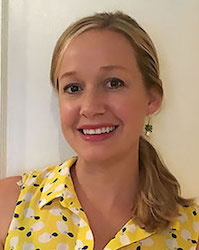 Self-affirmation. Gratitude. Kindness. Positive perspective. These are but a few of the elements that comprise one’s emotional-social toolbox, as described by Lauren Mosback, MA, LPC, NCC. They also represent the foundation of the positive coping skills that she teaches children of all ages who visit her Paoli, PA-based practice to develop and strengthen every day.

The anxious 1st-grader whose parents are going through a divorce so bitter that he’ll never celebrate another birthday with them together. The bullied 4th-grader whose self-esteem is so low that she won’t participate in any after-school activities.

The depressed 8th-graders who don’t have a date for the graduation dance and are being shamed on social media. Mosback knows them all, and knows that they all need to be encouraged to rely on one or more of these strategies in order to be happy, healthy, and productive in their young lives.

“I have seen the difference between kids who learn coping skills when they’re younger versus when they don’t,” said Mosback, a Rosemont alumna of the School of Graduate and Professional Studies from the Class of 2010 who earned her degree in professional counseling psychology. “Learning those skills through counseling can be a challenging process and takes time.

One commonality I’ve found across the board with high school kids and college kids who’ve developed negative coping skills, such as addiction or self-harm, is that there are no healthy coping skills incorporated into their lifestyle and we’re starting from scratch when I first meet them.” 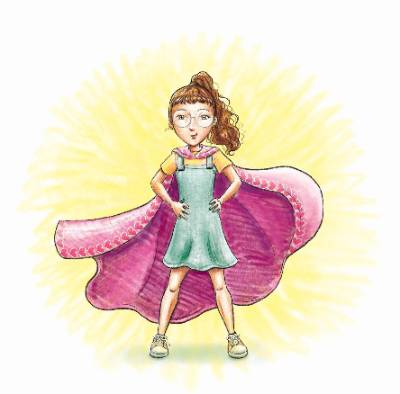 published children’s book, My Sister’s Super Skills (Mascot Books), a story of how big sister Lily helps to empower her younger brother David, who is having a very bad day. His feelings of frustration, sadness, and stress are taking over his emotions, and he’s in need of positive energy to improve his day and to feel better about himself.

Fortunately, his big sister is strong in the ways of emotional intelligence and is there to show him how simple physical actions and mental exercises can help him to be as brave and confident as she is.

Making its debut on bookshelves and online stores this past January, the book has earned a gold seal by the Mom’s Choice Awards, a globally recognized benchmark of excellence for family-friendly media, products, and services as determined by reviews and evaluations occurring across more than 60 countries.

The book is also currently a semifinalist in an international publishing competition that was supposed to bring Mosback and other authors to the Seattle area this April before the coronavirus (COVID-19) pandemic appeared.

“Publishing my book and getting it out in the community has been very exciting,” said Mosback, a mother of three who has become a bit of a local celebrity among parents who have spoken with her at book signings and other events about the impact that the book has had on their children and their families as a whole. “I’ve heard from many parents who feel like the book helps them in their own lives, too, as they’re reading to their children.”

Mosback can’t quite recall when her mind began to weave together the story that encompasses the theme of her book. She only knows why she wanted to tell that story in the first place. “I’ve always had a lot of ideas for a book that could help children to develop their emotional and social skills, to see those skills as fun, and to incorporate them into their lives,” she said. “As a counselor, I’ve always felt that I can help to equip children with different tools to address things that are very specific, like anxiety or panic.”

A work in progress that developed over years of education, training, and counseling practice, Mosback believes her book is the culmination of a message that she has consistently communicated and emulated with her clients since she entered the field: That a strength-based approach that promotes positive psychology and incorporates growth mindset principles is an effective way to care for today’s children.

“I notice as a counselor and as a mom that when I help kids to focus on their strengths and develop skills that they can use, it’s better for them to focus on the good and the positive as opposed to what’s going wrong all the time,” she said.

While Mosback isn’t certain whether today’s children are exposed to more stressors than those of previous generations, what is not as debatable, as she sees it, is that kids are encouraged to talk about their feelings and emotions today as a way to relieve their stress more than they’ve ever been before.

She’s become so accustomed to speaking with young people with intense revelations that she wanted to position this book to creatively and effectively convey that learning to cope and to talk about one’s feelings can be a challenge, but is nowhere close to an impossibility.

“There still is a bit of a stigma out there, however, and the more that I learned that children in general needed help with things like anxiety or depression, I began to think that a book could be a good way to introduce skills to children that would allow me to help more kids, and not just those who I see in my counseling practice,” she said. “It’s really been in the works for a while and is inspired by the kids who I do counsel and have counseled.”

Each “super skill” presented in the book is linked with different animals that are associated with specific behaviors and are equally familiar to kids. The animals and the scenarios that they appear in, as taught by Lily, that big sibling who is sure to be the hero or heroine in the eyes of any young child, make the lesson more relatable to children and more easily remembered when they need to exhibit the learned skills in the moment.

The first step, naturally, is to take deep breaths and, like a horse exhale them with lip-flapping enjoyment. Like the lion, David is taught to recall his unique strengths and to repeat them aloud as a way to self-affirm – to say “I’m strong, caring, and happy. I am me.” Exercise, play, and bravery are exhibited by the dolphin that enjoys his time in the pool. The jellyfish giggles; the koala bear snacks and gets cozy for rest time; and the sloth brings racing thoughts, worrying, and pacing to a peaceful halt.

Gratitude is achieved by talking about David’s favorite part of that day to revel in that moment, even if he had some struggles throughout that day. Bathing like a cat promotes self-care and laughing like a chimpanzee opens the gates to being able to talk, share, and to be kind — even if that kindness is extended to others who were not kind to him. The lesson here is that positive thoughts need to be stored because tomorrow is a fresh start. The time to smile, dance, and sing like a bird is now.

By book’s end, David has learned that his mood can improve with a few healthy actions. His cape-donning sister has helped him to unleash innate powers that he’s possessed all along. He’s learned new tricks that he should now teach to others.

The Heroic Counselor  Lily was always meant to be the older sibling, but in many ways she’s also intended to be anyone in a position to project a positive influence on children, said Mosback, the youngest of three children in her own family.

“I think kids tend to learn more from their peers and really do look up to their siblings,” she said. “So it was important for me to highlight that healthy sibling relationship for kids to see that you can have a great friendship and relationship with your brother or sister.”

Although she supports the depiction of females as leaders and powerful, Mosback said that there’s not much significance to Lily being a girl. Rather, it was more important to show the emotional role model and someone who was armed with a skillset that would be desirable to young children.

Lily takes a leadership role and shows her little brother what she’s learned in her own life as someone he can aspire to be. Importantly, Lily is a young-enough child herself, perhaps a young teen, though that is left somewhat up to interpretation.

“It was neat to tell this story from the child’s perspective,” said Mosback, who also had creative collaborative input with the book’s illustrator. “Kids learn from their peers, siblings, and parents, but the older sister here is the role model. Of course, we as parents like to feel like we’re calm, collected, mindful, and able to practice these skills ourselves as well. And it’s also important for us to model for our kids and to have those happy, healthy relationships.”

It’s not unlike the role of a child’s counselor, either. One who originally saw herself teaching in a classroom, it wasn’t until an internship on a Navajo reservation during her undergraduate studies that connected her to a young child with autism that it became clear that she wanted to be a counselor.

“I knew then that this was my path,” said Mosback, who earned an Outstanding Achievement Award at the graduate level during her time at Rosemont and went on to work with juvenile offenders before opening her own practice three years ago.

She believes the smaller class sizes at Rosemont also helped to prepare her for the types of intimate conversations she’s likely to have on any given day with her clients and their families. “I learned a lot and grew a lot at Rosemont, and felt like I could really have conversations about specific topics with my instructors. The professors were able to cultivate great relationships with their students there and that has impacted me to this day.”

Lily’s super skills have unearthed what will become a developing series of children’s books expected to delve into various strategies for stress management in children. A My Sister’s Super Skills edition that will focus on anxiety specifically is being written and subsequent editions on depression, bullying, and grief are anticipated.

Pending the absence of current social distancing guidelines, Mosback is also eager to get back into the community through her promotional and educational events, not to mention her actual practice, where she currently has initiated a tele-therapy program for her clients.

As always, she’s using this opportunity to remind everyone to remain attuned to the positives. “Incorporating these super skills into your life and then developing habits from them makes it so that maybe your anxiety isn’t going to arise, or it’s not going to be as severe, or that you’re not going to become so depressed because you’ve incorporated all of these healthy strategies,” she said.

“It keeps some of those really difficult challenges more at bay. In particular, practicing gratitude helps to create a mindful and optimistic mindset during uncertain and challenging times. And this helps us to learn, grow, and become stronger.”