January 3rd, 2020. Elizabeth Russell ’18 was simply looking to be part of something. It was freshman year and she wanted her time at Rose­mont College to be meaningful, active, and spent with others. 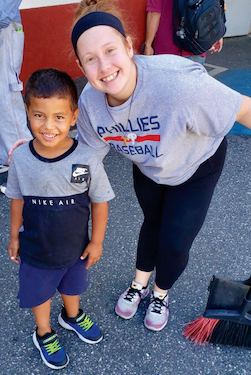 As always, the proverbial welcome mat lay at the entryway to Campus Ministry. Knowing that she was seeking an outlet for participation, Jay Verzosa, then the ministry’s director, introduced Russell, then a Psychology major, to upperclass­men who helped with planning service trips, retreats, and other initiatives.

Although she had no prior experience with community service, the fit felt right, and soon she found herself on her first service trip. This experience was at the Catherine McAuley Center, a Scranton facility that houses women who are tran­sitioning from unstable environments.

“After that, I was pretty much with Campus Ministry all of the time,” said Russell. Now serving her second year of missionary service since graduating with a degree in Clinical Sociology (minor in Theology), Russell said the experience of that first service trip validated the type of involvement she was seeking.

“I met a social worker on that trip, and he met people with love every time,” she said. “People went to him for their basic needs, and I thought that was the coolest thing ever. I was just so impressed and decided I would really love to do that.”

When she returned to Rosemont, she began paving a career path that today continues to provide affirmation. Russell felt so strongly about her intentions that by sophomore year she had switched to majoring in Sociology.

After earning her degree, she wanted to further ascertain that she was heading in the right direction, so she took an opportunity at Immaculate Conception Catholic Church in Durham, NC, where she spent nearly one year helping to provide emergency assistance and other services.

She arrived at St. Francis Inn Ministries, a Franciscan community in the Kensing­ton section of Philadelphia that provides for the poor and homeless, this past August and will remain there until July.

She intends to pursue her master’s degree in social work as soon as next year. “Right now, I feel drawn to working with the homeless popu­lation in urban ar­eas and those with substance abuse. But I’m flexible and that’s where going back to school might help me to figure out more details,” she said.

Kensington, a section of the city known for its poverty and drug use, particularly opioids, is the setting of the popular cable show Intervention. Russell knows that she will be exposed to all the evi­dence that she will need to make her next big decision. “Kensington is like an epicenter for those who are struggling with substance abuse and homelessness, especially both at the same time,” she said. “And I really wanted to be sure that what I was getting into was something that I really wanted before the advanced degree or full-time job search.”

She is one of 10 members in a program who are being trained to organize, cook, facilitate, and serve meals each day for 200-400 people in the restaurant-style soup kitchen. A big part of her role is interacting with those she serves and helping to maintain positive relation­ships between community members and the facility.

“Every day is different,” she said. “I am looking forward to feeling more bonded with the people in this community and to being a member of this community.”

Already familiar with the neighbor­hood because she volunteered at the Inn while at Rosemont, Russell said that sometimes just being willing to listen to someone who wants to talk or physically being a presence can be all that one needs.

“You get to hear a lot of stories,” she said. “A lot of people who come to the Inn were raised here. Some people are displaced. People will talk about the drugs that were used years ago versus now, and how the violence has shifted, how gentrification is affecting people. One of the great things about this work is that it teaches you how to interact with everybody. Such a big part of our mission here is to maintain the dignity of the people and to be sensitive to them.”

She looks back on those chance intro­ductions at Campus Ministry as the first step to finding her purpose to make sacrifices for the people she wants to help. This is the work she wants to do for the foreseeable future.

“When I tell people here that I’d like to be a social worker, they tell me that they think I’d be really good at it,” Russell said. “Just knowing that I’m good at car­ing about people and making people feel has been very good for me.