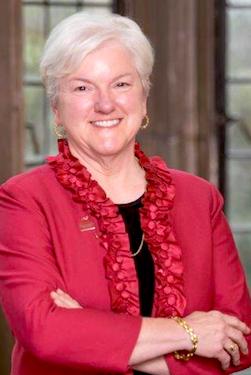 President Hirsh is an internationally recognized scholar of turn of the century art in Western Europe. She has served as a visiting fellow at numerous institutions including the Art Institute of Chicago and the National Gallery of Art, as a visiting curator at the Montreal Museum of Fine Arts and at the Schweizerisch Institute fur Kunstwissenschaft in Zurich, and as a visiting Senior Fellow at the Center for Advanced Studies in the Visual Arts.

She is the author of numerous scholarly articles and exhibition catalogues. In 2004, Dr. Hirsh's fifth book, Symbolism and Modern Urban Society was published by Cambridge University Press.

She has also been responsible for successful completion of the College's $40 million fundraising Campaign which has helped to provide academic enhancements, scholarship funds, and enhancements to Rosemont's campus through the construction of the new Raven's Athletic Complex, the development of the Library Information Commons, the purchase and renovation of Gracemere Honors House, the renovation of Cardinal Hall into a modern dining facility and café, the renovation of the Rotwitt Theater of McShain Performing Arts Center, and the current construction of the College’s 73,000 square foot Community Center, due to open in the fall of 2019.

During the summer of 2015, Dr. Hirsh launched Our Tuition Promise, a bold step taken to make a Rosemont College education affordable by reducing tuition 43% and room and board 14% for the 2016-2017 academic year. This courageous action resulted in an increase in applications to the College by 64% and a 30% increase in deposited students for Fall 2016.

Many local and national publications carried the story and the increase exposure to the College was instrumental in securing the largest entering class in the school’s history. In addition, the academic profile of the students entering Rosemont has increased year-over-year since the launch of Our Tuition Promise.