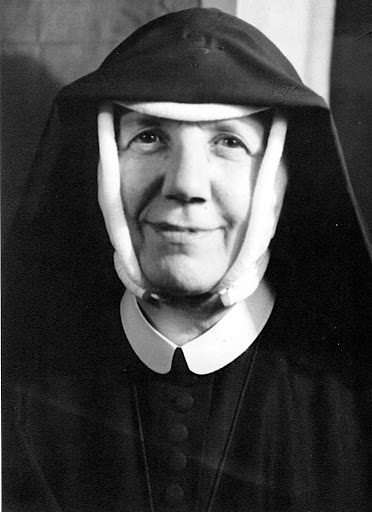 Superior of the Rosemont religious community at Rosemont 1924 - 1936

Mother Mary Ignatius (Annie Carroll) was born in 1882 in Dromkeen, County Limerick, Ireland, and was one of five children. She was educated in Ireland and England; entered the novitiate of the Society of the Holy Child Jesus in 1902.

“Mother Mary Ignatius was a remarkably vivid and capable person even at ten, when she became mistress of her father’s house in Ireland after her mother’s death. She was a leader, too, at her Sussex convent boarding school. As a Sister, her gradually maturing powers showed themselves early, but came to full expression as Superior and President of Rosemont College, to which she came in 1924 at the age of forty-two.

In 1924, Rosemont was three years old with eight Sisters, forty students, an ornate mansion set in forty acres, a made-over barn, a new gymnasium, staggering debt, few sources of income, and many urgent needs. In less than five years she had erected four large stone buildings; more than doubled her student body; built up her faculty; and extended community contacts. By the time of her death in 1939, two smaller buildings had been added, a third was about to be begun, the student body numbered 227, and the college was accredited by the Middle Atlantic States Association of Colleges and Secondary Schools. It is the story of remarkable growth, and of the heroic effort, dauntless faith, humor, and energy of a singularly vivid and unforgettable personality.”

By 1936, Mother Ignatius’ health began to fail. Her duties as Superior at Rosemont were turned over to Mother Mary Cleophas Foy, who was also Dean.

In late spring of 1939, M. M. Ignatius and the Society’s American Provincial, visited the Motherhouse in Rome and various houses of the Society. Before their voyage back home, Mother Ignatius visited her family in Ireland for the last time. On Sunday, July 30, the last day of the voyage, Mother Ignatius attended Mass but left after receiving Holy Communion. A short time later she suffered a heart attack and died. A few hours later the ship docked in New York harbor, and those waiting for her with anticipated joy, were suddenly filled with grief. Mother’s one unfulfilled dream, a Chapel, was to fall on the shoulders of Mother Mary Cleophas Foy, her successor as President.