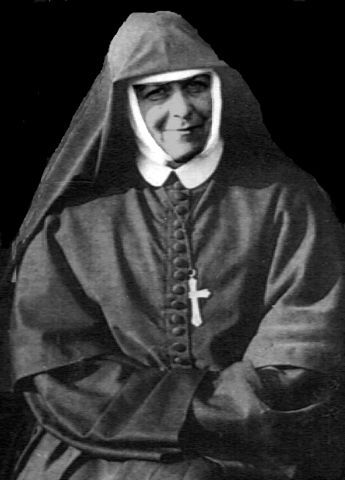 Mother Mary Dolores, born Mary Brady in 1869 in Easton, Pennsylvania, was one of five children. Along with her four sisters, she was sent to the Holy Child Academy at Sharon Hill, Pennsylvania for her high school years. In addition to her scholastic endeavors (mathematics in particular), Mary showed talent for art: lettering, illumination, water color, and the art of gold embroidery for which she was later distinguished.

Mary Brady entered the Society and in the fall of 1888, at the age of nineteen. She began her early years of teaching at various parochial schools. Later (circa 1902) she did pioneering work in the field of teaching whereby three religious congregations worked together on a cooperative project, paving the way for the building of a new high school. “Meeting the wants of the age,” a Cornelia Connelly maxim, was being followed.

In 1909, she was sent to Chicago as the Superior of two new convents there - St. Veronica’s and St. Ignatius. In 1919, Mother Mary Dolores became Superior at St. Leonard’s Academy in Philadelphia despite some health problems. After three years, in 1922, she was appointed President and Superior of newly-established Rosemont College of the Holy Child Jesus.

For two years she carried the burden, no doubt taxing her strength. Yet in those two years she drew to the little college a nucleus of friends which was its strength through all the formative years. What is more, she impressed on the student body the characteristic Holy Child spirit of simplicity and loyalty, which is Rosemont’s dearest endowment. In the beginning, only the stately Main Building and a converted barn and stable were used for classrooms, living quarters for nuns and students, art studios, an auditorium, and science labs. Mother Dolores knew of the pressing need for a gymnasium and athletic field, so in 1924, both were built. Because of her health, she was relieved of the burden of the college later in 1924, to the regret of all.

Mother Dolores went to the convent at Suffern, New York as assistant to the Superior. However, due to unforeseen circumstances, she again found herself filling in as Superior and overseeing construction work for a new school wing.

By 1932, her strength decreased visibly, but pushed on to complete the school year. On September 11, 1932, the Feast of the Holy Name of Mary, she died peacefully.