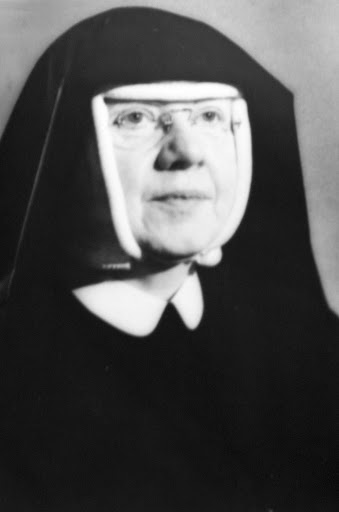 “Born in 1880 in Philadelphia, oldest daughter of Mr. and Mrs. Charles Foy, Clara, a high-spirited and active girl, was educated at the Holy Child School of St. Leonard’s on Chestnut Street, entering the Holy Child Novitiate at Sharon Hill, Pennsylvania, shortly after graduation. She came to Rosemont in 1924, after a varied teaching experience which included the office of principal or “Prefect” at her own old school of St. Leonard’s Academy in Philadelphia and at St. Walburga’s Academy in New York.

Dean of the college from 1924 to 1936, Superior of the Rosemont Community from 1936 to 1939, and President of the college from 1939 until her death in 1946, she gave to its development the stabilizing qualities of her broad human understanding, good judgment, humor, and wisdom, complementing, to a marked degree, the creative but sometimes almost too sanguine temperament of her associate, Mother Mary Ignatius. Together they made a remarkable team. ...a contribution [the biography] to the history of Catholic higher education at a formative period, but also the portrait of a vigorous, forthright and very lovable personality."

Mother Cleophas had received her BA from Catholic University, a Master’s degree from Fordham University, and did post-graduate work at the University of Pennsylvania.

She managed to make Mother Ignatius' dream come true - the construction of the Immaculate Conception Chapel in 1941. Mother Cleophas had a big hand in the selection of women saints for the stained glass windows in the chapel, saints that would inspire the lives of the student body. She led the college to achieve recognition by the Association of American Universities.