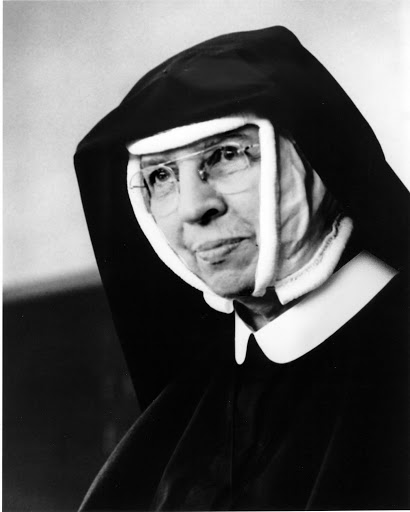 Mary Ellen (Nelly) Diamond earned her undergraduate degree in Chemistry from the University of Pennsylvania in 1921. In 1924, Ellen came to newly chartered Rosemont College to teach Chemistry and Biology. She entered the Society of the Holy Child Jesus, took her first vows in 1928, and her final vows in 1933. By 1936, Mother Chrysostom Diamond had earned her master’s degree and doctorate in Plant Physiology from the University of Pennsylvania.

Mother Chrysostom became the first chairman of the now separate Department of Chemistry, having established programs for new laboratories on the second floor of Good Counsel Hall. By 1938, she introduced Physical Chemistry, a course not offered in many small undergraduate colleges. Two years later she introduced semi-micro qualitative analysis into the program. Her breadth of vision encompassed the whole field of science and brought about the construction of a science building in the 1950s.

In 1952, Mother Mary Chrysostom was chosen as Rosemont’s fifth President. She initiated the Honors Convocation; oversaw the second addition to the Gertrude Kistler Memorial Library in 1954; and the building of the new dining hall in 1956. Her term as President came to a close in 1957.

For five years, her strong, pioneering spirit encouraged the continued growth of Rosemont College. Sister Mary Ellen Diamond was named Professor Emeritus in 1968, having spent only a few of the previous forty-four years away from Rosemont. Her interest and care for “things Rosemont” never decreased. In 1978, Sr. Mary Ellen Diamond celebrated the Golden Jubilee of her religious profession.

The Alumnae Journal of 1968 paid tribute to Sr. Mary Ellen noting that “her close personal interest in every aspect of her students’ lives forged a strong bond between the students and their teachers, a bond which became a tradition in the Science Department.”