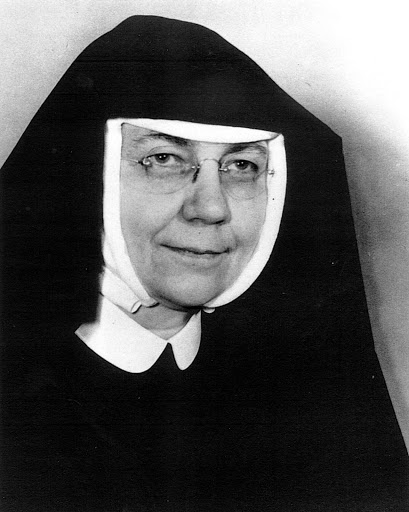 Mother Mary Boniface (Caryl Henze) was born in 1899, the second child born to her parents who were living in lower Manhattan. With the birth of their third child (two boys and one girl), the family moved to the Bronx near Bedford Park.

She was educated in New York and found competitive spirit in inter-school science and mathematics contests as well as on the basketball court - thanks to her two brothers, who also “demanded that she develop a keen sense of humor, a capacity for nonsense, and the art of spirited repartee.” She graduated from New Rochelle College in 1921.

Now looking for a job, she heard about an opening for an English teacher at St. Walburga’s Academy. Her interview was with the principal, Mother Mary Cleophas Foy, S.H.C.J. (later to be Rosemont’s third President) who hired her. Caryl Henze taught there for five years. While there she had observed several alumnae of St. Walburga’s enter the Society of the Holy Child Jesus. By September 1926, she followed them into the Society where she received her religious name of Mother Mary Boniface.

In 1929, Mother Boniface arrived at Rosemont College to teach English and History, greeted again by Mother Mary Cleophas, Dean of the College. After being there only one year, she was asked to go to the Oak Knoll School in Summit, New Jersey as a Prefect (Principal). From there she went on to become: Mistress of Novices in Sharon Hill, PA.; earn her Masters degree at Catholic University; Superior of the Rosemont College community in 1946; and the college’s fourth President following the death of Mother Mary Cleophas.

During her presidency, Dalton and Carroll Halls were purchased, and she oversaw the construction of a Science Hall and McShain auditorium. It was noted that Mother Mary Boniface Henze “...was a charitable religious, a competent administrator, an educator who appreciated the importance of being with the students...” She had an open door policy.

While Mother Boniface’s work load increased, she became overly fatigued. After some rest, she was appointed Superior and President of Rosemont College for another three years, leaving Rosemont in 1952 to go to Rome. Mother Boniface returned home in 1964 to become the Provincial of the Rosemont Provence, one of three in the U.S. Failing health caught up with her and she died January 1, 1966.