History of The Mission

Over the years, the Mission of Rosemont College has been stated in various ways, from a simple sentence in 1922 to the expanded version of today. Yet, key thoughts have always been embedded throughout. Words like Catholic, knowledge, joy, integrity, faith, loyalty, and “meet the wants of the age," have stayed consistent.

Incorporated in 1921, the College received its charter in 1922. That same year, the College’s first Mission Statement was introduced. It simply stated that the College’s purpose was to prepare girls to take their place in the wider fields of activity now open to them, while preserving, at the same time, Catholic ideals in their integrity. By 1927 the Mission was expanded to read,:

“[Rosemont’s] purpose is to meet the wants of the age by preparing women to take their places in the social and intellectual world…provide facilities for the higher education of Catholic women…development of moral character and the cultivation of true piety and solid virtue.”

Seventeen years later, in the midst of World War II, a time when more opportunities were open to women by necessity, the Mission Statement repeated the sentiments of the 1927 version with an addition, “students, after completing their College courses are equipped to continue their own education to relate their knowledge and training to whatever opportunities and circumstances life may offer.”

Two decades later, in 1963, the Mission was expanded to reiterate that the College existed “within the frame work of the Roman Catholic Church whose mission is the generation and development of the Christian person, accomplishing this through a liberal arts program that includes theology and philosophy.” 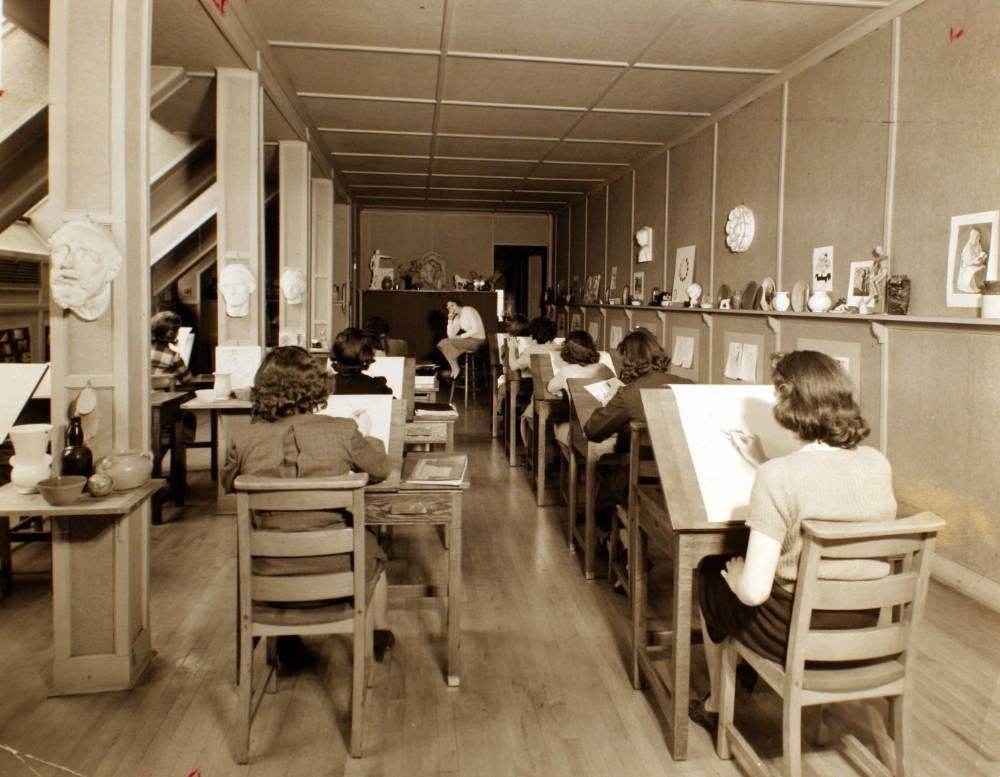 The Mission continued to state that the unique character of Rosemont, therefore, does not lie in its educational program, but in the distinctive climate in which the program is implemented. Cornelia Connelly, the foundress of the Society of the Holy Child Jesus, was and continues to be the source of inspiration of the spirit which characterizes the College.

It is a spirit of loyalty and trust which marks the relationship between faculty and students, and among the students themselves; a spirit designed to encourage growth in the exercise of responsible freedom, reverence for human personality, appreciation of Christian values, and a heightened awareness of the Christian responsibilities of knowledge, love, and service.

The 80s and 90s were about growth and change. As Rosemont grew, the College introduced continuing education and graduate programs for working adult women and men. As the century was coming to an end, the Mission was shortened. The year 1993 revealed a Mission which adopted the terms “diverse ages” and “men.” It read, “a liberal arts college in the Catholic tradition committed to the education of women of diverse ages and background…Rosemont extends its fundamental commitment to the education of men as well as women…development of an open and critical mind, respond to the wants and needs of the age…continued growth and learning…act responsibly and effectively in the world.” Three years later, the Mission was revised to read, “Rosemont, rooted in its Catholic heritage and in an ecumenical spirit, welcomes persons of all beliefs. It is committed to excellence and joy in teaching and learning.”

The newer version of the Mission of Rosemont was established in 2002. As the College celebrated its 80th year, the Mission had come full circle to read, “Rosemont College is a community of learners dedicated to excellence and joy in the pursuit of knowledge. Rosemont College seeks to develop in all members of the community open and critical minds, as well as to make reasoned moral decisions.

Additions to the Mission Statement

Rooted in Catholicism and guided by the educational principles of Cornelia Connelly and the Society of the Holy Child Jesus, Rosemont College values: Trust in and reverence for the dignity of each person; Diversity in human culture and experience; Persistence and courage in promoting justice with compassion.”

The College has continued to grow while adjusting its focus on the pressing needs of the time in our changing world. Recognizing this reality, the Mission and Ministry ACTION Committee recommended additions to the Mission Statement which were adapted and then approved by the Board of Trustees in 2015-2016. These additional goals/concepts were included: lifelong learning; responsibility to serve a global society; engagement with all faiths; building an international community; and care of our common home, the Earth. The current Mission Statement of Rosemont College reads as follows:

Rosemont College is a community of lifelong learners dedicated to academic excellence and fostering joy in the pursuit of knowledge. Rosemont College seeks to develop in all members of the community open and critical minds, the ability to make reasoned moral decisions, and a sense of responsibility to serve others in our global society.

Rooted in Catholicism, Rosemont welcomes all faiths and is guided by the educational principles of Cornelia Connelly and the Society of the Holy Child Jesus to meet the needs of the time.